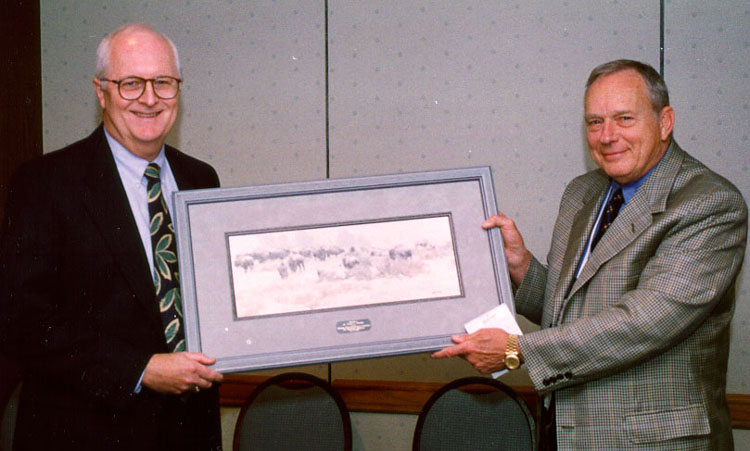 Dr. Albrecht was a logical choice to receive the first award. A member of the NBEC from 1971 to 1988, Dr. Albrecht led the organization through a major restructuring in the late 1970's. He was also instrumental in overseeing transfer of ownership of the examination item banks from the Professional Examination Service to the AVMA/NBEC in 1987. During Dr. Albrecht's service on the NBEC, several other major developments took place, including the introduction of the Clinical Competency Test (CCT) and development of a revised examination blueprint for the National Board Examination (NBE) and CCT.

Examination security was always one of Dr. Albrecht's major priorities. He established the NBEC's Security Contingency Committee and led efforts to ensure that new forms of the NBE contained items that were never previously administered, thereby severely inhibiting the ability of candidates to subvert the security of the examination by memorizing questions.

"Among Dr. Albrecht's greatest contributions was his drive for excellence," notes Dr. William Kay, long time consultant to the Professional Examination Service who worked closely with Dr. Albrecht from 1977 to 1988.

Dr. Albrecht's resume includes many notable achievements. Those particularly relevant to the licensing examination program include, in addition to 17 years of service on the NBEC (Chair of NBEC in 1980-81), membership in the American Association of Veterinary State Boards (President of AAVSB in 1975-76), service on the Colorado State Board of Veterinary Medicine (1970-80), and membership on the Educational Commission for Foreign Veterinary Graduates (1978-1983). Dr. Albrecht has also been very active in the AVMA, serving on the AVMA Executive Board (1979-82) and as AVMA President in 1983-84. He still serves the profession through membership on the American Veterinary Medical Foundation board.

A native of Iowa, Dr. Albrecht graduated from veterinary school at Iowa State University in 1950. After an internship at Angell Memorial Animal Hospital and one year as a small animal clinician at Iowa State, he founded the Aspenwood Animal Hospital in Denver, where he worked from 1952 until his retirement in 1990. He and his wife Elinor have four children. A licensed pilot, Dr. Albrecht spends most of his time these days traveling the world, playing golf, and skiing.

"In reviewing the list of possible recipients for the first NBEC Award, the committee concluded that Dr. Albrecht was a logical and unanimous choice," noted NBEC Chair Dr. Michael Groves. "His relentless dedication to improving the quality and security of the national licensing examinations, and his vision for the future of the NBEC are greatly appreciated by those of us who now serve as NBEC members. It is truly an honor for me to be able to present this award to Dr. Albrecht."

The award was an award-winning photograph of a herd of bison in a snow storm taken by North Dakota photographer Pat Gerlach.