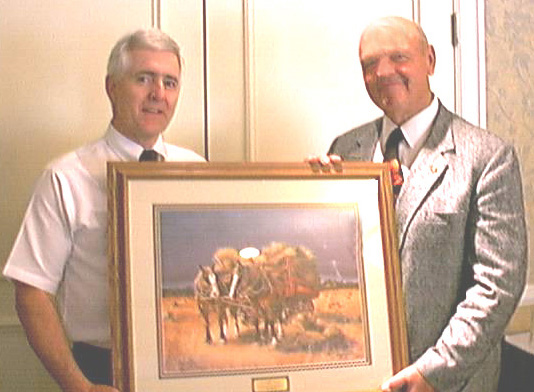 Dr. Strahm served as a member of the NBEC from 1972 to 1989, and chaired the NBEC in 1982 and again in 1986. During his tenure, the National Board of Veterinary Medical Examiners was restructured to become the National Board Examination Committee, governed by new operating guidelines. These years also saw the implementation of common testing dates, adoption of a comprehensive examination blueprint, and several challenges to the security of the national licensing examination program.

Shortly after joining the NBEC in 1972 as one of the representatives of the American Association of Veterinary State Boards (AAVSB), Dr. Strahm was elected a member of the NBEC's Executive Committee. In 1974, he began to work on a new clinical simulation examination, which was designed to supplement the National Board Examination. This work led to the development of the Clinical Competency Test (CCT), which was first administered to candidates in 1979. In a few years, the CCT came to be adopted by nearly all licensing boards as a requirement for licensure to practice veterinary medicine. The CCT used a series of patient management problems to simulate the clinical decision making process.

Dr. Strahm chaired the NBEC during the development of its first Request for Proposal (RFP), and served to see the RFP process completed in the awarding of a new contract to the Professional Examination Service in January 1989.

Dr. Strahm has a distinguished record of service to the veterinary medical profession, highlighted by his term as AVMA President in 1989-90. His service to the national professional association also includes 21 years as a member of the AVMA House of Delegates. He has also served on many other AVMA bodies, including those dealing with governmental relations, long range planning, continuing education, and food animal medicine. Dr. Strahm chaired the American Veterinary Medical Foundation from 1995-1998.

A native of Fairview, Kansas, Dr. Strahm received his DVM from Kansas State University in 1959. He has operated the Osage Animal Clinics, a mixed animal practice in Pawhuska, Oklahoma, since graduation from veterinary school.

In spite of his remarkable record of service to the veterinary medical profession, Dr. Strahm has also found time to serve his community. He was a member of the Pawhuska School Board for 25 years, and has also served as a member of the Board of Directors of the Oklahoma School Boards Association and the National School Board Association. He was also active in Jaycees and 4H. Dr. Strahm and his wife Barbara have three children.

"Dr. Sam Strahm is the kind of person who gets things done," notes NBEC Chair Dr. R.B. Baker. "He is universally respected in the profession as a thoughtful and competent leader. The NBEC is fortunate that Dr. Strahm was able to provide such solid leadership to the organization over the years, and those of us who serve on the NBEC now owe Dr. Strahm our heartfelt thanks for a job well done. This award is our way of saying that."

The award is a print entitled "Dakota Harvest" by Bismarck artist Gary Miller, depicting two draft horses pulling a hay wagon with a thunderstorm approaching on the horizon.