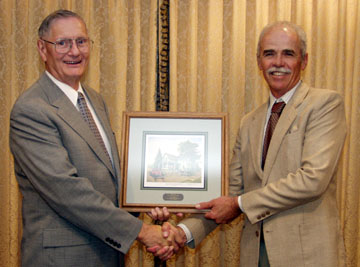 The National Board of Veterinary Medical Examiners (NBVME) has presented the fourth NBVME Award to Dr. Billy E. Hooper of Lafayette, Indiana. NBVME Chair Dr. Norman LaFaunce presented the Award to Dr. Hooper during the NBVME's July 16 meeting in Nashville.

Dr. Hooper served as a member of the NBVME from 1975 to 1980, representing the Association of American Veterinary Medical Colleges. Soon after joining the Board, Dr. Hooper was elected to the Executive Committee. During his tenure, he also served on the Board's Steering Committee, Constitutional Committee, and Examination Procedures Committee. Through his work on these committees, Dr. Hooper made several important contributions to the NBVME and to the national licensing examination program.

The Steering Committee, which Dr. Hooper chaired, was appointed to take a serious look at the National Board Examination (NBE) and at the structure and function of the NBVME as an organization. Members of the Steering Committee included Drs. D.T. Albrecht, N. W. Piper, and R. B. Talbot. Their report, submitted to the Board in July 1976, identified several important areas for consideration, including improvement of the NBE, and restructuring of the NBVME itself.

As a member of the Examination Procedures Committee, Dr. Hooper played a major role in the development of the first blueprint for the NBE. Initially, items on the NBE were classified only by discipline. Because the NBE was a licensing examination, there was a need to demonstrate to the licensing boards that the NBE covered the major animal species and body systems important for competent practice. The result of this work was the approval by the NBVME's Executive Committee in January 1979 of the "cube model," allowing each item on the NBE to be classified according to three dimensions: discipline, animal species, and organ system. The blueprint developed by Dr. Hooper and his colleagues was used through 1992, at which time veterinary practice role replaced discipline as one of the three dimensions. The new blueprint addressed serious concerns about item quality, item duplication, and content coverage, and it represented a major step toward ensuring that the NBE (and the examinations that followed it) were relevant to entry-level private clinical practice, rather than being examinations modeled only on the veterinary medical curriculum.

It was through his work on the Constitutional Committee that Dr. Hooper made his second major contribution to the NBVME. In 1976, the Steering Committee identified a major problem with the NBVME, namely, that it had no legal status. The Board had been operating for over 20 years, but had never been legally incorporated. As a result, the NBVME appointed a Constitutional Committee, chaired by Dr. D.T. Albrecht, and including Drs. S.E. Strahm and Hooper, and charged them to come up with a new constitution for the organization. This resulted in a complete restructuring of the NBVME, and the creation of the National Board Examination Committee (NBEC). Bylaws, approved in July 1978, clearly identified the independent nature of the new organization. Over the next two years, the 31 member NBVME became the 12 member NBEC. This action was the first step toward full independence for the NBEC, which took place in 1995.

"Dr. Billy Hooper is known throughout the profession for his keen mind and his ability to look at a complex situation and come up with a well reasoned solution," notes NBVME Chair Dr. Norman LaFaunce. "When he received the NBVME Award in 1999, the late Dr. Whitey Albrecht shared fond memories of working with Dr. Hooper during a time of great transition and new directions for the national board. It is a pleasure to be able to recognize Dr. Hooper with the Award today."

The Award was a framed print by Bismarck artist Gary Miller entitled, "A Quiet Afternoon."

The NBVME Award was established in 1999 to recognize individuals who have made significant personal contributions to the national licensing examination program. Previous recipients include Drs. Duane T. (Whitey) Albrecht in 1999, Samuel E. Strahm in 2000, and Richard S. Hawe in 2001.