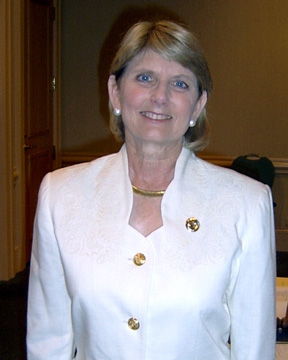 The National Board of Veterinary Medical Examiners (NBVME) presented the 2008 NBVME Award to Dr. Nancy A. Collins of Alta Loma, California.  The award was given to Dr. Collins by NBVME Chair Dr. Meg Glattly during the NBVME’s July 26 meeting in Vancouver, British Columbia.

A 1976 graduate of the veterinary school at the University of California, Davis, Dr. Collins has been engaged in private equine practice in southern California since 1978, as the owner of Collins Equine Veterinary Services.

Dr. Collins was appointed to the California Veterinary Medical Board in 1990, and served until 2003, including four years as President.  Through her service on the California board, she became active in the American Association of Veterinary State Boards, where she served as AAVSB President from 1994-95.  The AAVSB appointed Dr. Collins to the National Board Examination Committee (NBEC) in 1995, and she served for three, three-year terms.  She chaired the NBEC from 2000-2001.

The NBEC underwent some of the most significant changes in its 54 year history during the time Dr. Collins served as a member of the board, including incorporation as an independent organization, moving the office from suburban Chicago to Bismarck, development of disciplinary examinations for use by licensing boards, selection of the National Board of Medical Examiners as the vendor for the new computer-based North American Veterinary Medical Licensing Examination (NAVLE®), and development of the Qualifying Examination and the Veterinary Clinical Skills Assessment for use by the AAVSB’s Program for the Assessment of Veterinary Education Equivalence (PAVE).  The first administration of the NAVLE in November-December 2000 took place during the year that Dr. Collins served as NBEC Chair.

In presenting the award to Dr. Collins, Dr. Glattly noted the countless hours of volunteer service that Dr. Collins, a fellow private practitioner, has devoted to the veterinary medical licensing examination program, and also commented on her distinguished record of service as a member of a licensing board.  She noted that board members receive little or no compensation for their time, and too often receive insufficient credit for the work they do in the interest of public protection and the betterment of veterinary medicine.  Dr. Collins’ long involvement in these important areas should serve as a model for future leaders in the profession.

The Award was a gold brooch with an equine theme, made by Australian artist Marina Andersen, which Dr. Collins is wearing in the above photo.

The NBVME Award was established in 1999 to recognize individuals who have made significant personal contributions to the national licensing examination program.  Previous recipients include: